HOW IT ALL STARTED

The Little Colonel Players was founded by a group involved with the Pewee Valley Women’s Club in 1956. There were several members, including Elsie Stanforth, who were interested in forming a theater group in the Pewee Valley area. They enlisted the support of Phil Hollenbach. Phil was active with the University of Louisville Little Theater and had the theatrical expertise that the group needed. The members had the interest, but Phil had the expertise to get things rolling.

The Little Colonel Players was incorporated in 1956. The group met in members’ homes over the first two years. They would read and discuss plays, and members would act out skits for the other members. Space was rented in the old Masonic Lodge, which was housed in the upstairs of the current Playhouse, to have a meeting place.

The group continued with its activities, but it wasn’t until 1958 that they were actually able to get performances underway. Two things happened in early 1958. The group went on a road trip to the Farm and Home Week at the University of Kentucky to present a one-act play, Little Nell or the Triumph of Virtue. This adventure is chronicled in the LCP archives and is covered in the history DVD. With a successful road trip under their belt, the Players were ready to begin their first season of plays. Space was rented at Valley Camp. Valley Camp was a “fresh air camp” for children from Louisville who came out in the summer to enjoy the fresh air of Pewee Valley. A building was rented and converted into a theater, and that’s where the first four seasons of plays were presented. 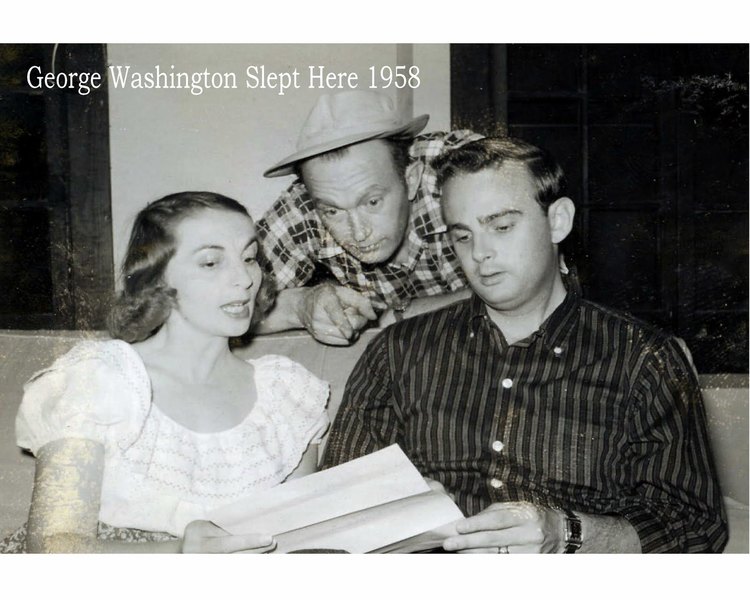 The first production was an evening of one-act plays, which included, not surprisingly, Little Nell or the Triumph of Virtue. There was no point in wasting all those rehearsals! The second production was a guest show from the University of Louisville Players, who presented The Lark. Then LCP produced its first full- length play, George Washington Slept Here, an outrageously funny comedy. As a tribute to its historical import, this play was been selected to be the first offering in the 50th Anniversary Season.

With a successful first season under its belt, the group was ready to go full bore into the second season. Four plays were selected and presented in the ’58 to ’59 season. The group was ready to forge ahead. Phil Hollenbach was the director of most of the early shows and as instrumental in moving the Players forward. His expertise was a key element in the early success. His enthusiasm and expertise would continue to be felt in full measure until the mid-70s, when his health began to decline.

Over the next few years, LCP presented a full four-play season at Valley Camp and boasted a membership of over 200 members. This was a great feat for so young an organization. LCP roared into the early sixties, hot on the trail of their successes in the fifties. LCP also produced a children’s play for kids and a youth show for high school and college age actors. LCP continues to provide acting opportunities for high school and college age actors by producing a youth show every year at the end of the regular play season.

In 1962, a near tragedy struck. The land where Valley Camp resided was sold for a development. What were the Little Colonel Players to do? Their home was being sold? With the recent successes of the first three seasons, the Players were not to give up so easily. Frank Mahin and other members of the Board organized a survey. Over 1000 surveys were mailed out to residents of Oldham and east Jefferson County to gauge their interest in supporting the ongoing operations of the Little Colonel Players. The response was overwhelmingly positive, so steps were taken to rent the space where Beard’s grocery had just vacated, our current location. An entire season of plays was missed while the space was renovated. The area that was formerly a grocery store was converted to today’s auditorium. The stage had to be built, risers were installed and the box office entranceway was constructed. Our youth performers were the last ones to perform at Valley Camp and the first group to present at the new location. Hundreds of volunteer hours were needed to complete the work, and it was almost all done by LCP members. Records from the 25th anniversary show that Hank Pulliam spent every weekend for seven months working on the conversion. That’s dedication.

In 1963, the Little Colonel Players were back in business. Regular seasons of four plays, with a summer youth show, were presented. Phil Hollenbach continued to be the main director and artistic consultant, while people like Frank and Louise Mahin contributed in big ways, both on stage and off. The Players were developing a following and a reputation for quality work. Things were progressing smoothly, until 1967. It was then that LCP learned their current building was being put up for sale. The post office had followed Beard’s Grocery across the street, so LCP was the only tenant. The President, Louise Mahin, asked the owners, Milton Carl Stoess and his brothers, to not evict the Players before the season was over. Season tickets had already been sold and LCP had to deliver!

The building continued to be listed for sale, with no takers. The price was an astronomical $16,000. LCP could not afford that type of mortgage. Over the year, Louise and others from the Board kept working on the Stoesses, and the price was whittled down to $12,000. LCP could not afford that much, either, but Dr Mack owned the building next door to the Playhouse and cut a deal with the Board to acquire part of the land from LCP for $4,000, leaving the Players with only $8,000 to finance. The decision was made to purchase, and a mortgage was taken out to secure the loan. Several members of the Board had to cosign the note, guaranteeing payment in case of LCP default. That mortgage payment was more than twice the monthly rental fee, but it was the best decision ever made for the Little Colonel Players.

In the 1972-73 season, the Little Colonel Players started offering dinner to patrons of the opening night production on Thursday. The dinner was initiated to boost attendance on Thursday nights and to raise money for the theater. Al and Lola Tomassetti started the dinners and cooked the opening night meal for each production for the first few years. After a time, other Players started taking turns at cooking the dinner. Thursday night was a sellout performance for years and years after the introduction of the dinner.

In the early 1970’s Phil became less active as his health declined. Frank and Louise Mahin, along with help from folks like Dick and Ina Duncan, Mackey and Hunny Bunny Fletcher and a host of other people, kept the theater running smoothly. Frank and Louise had been active contributors since the very beginning. Both held Board positions for many years. They performed a variety of tasks offstage that kept the organization running. Frank ran membership and the box office for years, after taking over for Margaret Hollenbach. Louise directed plays in the ‘70s and ‘80s, after doing some acting in the sixties, and Frank was a regular on the LCP stage, appearing in 49 shows over the years.

The theater originally started with just two productions of each show. That was expanded to three, with the addition of the Thursday night show. Eventually a fourth show was added, the Sunday matinee in the ‘70s. With continued success and increased ticket sales, the fifth show was added in 1981 and the format changed; the show went from one weekend to two weekends. The sixth show was added in 1984. Today we produce seven shows per play…three the first weekend (Friday, Saturday, Sunday), and four the following weekend (Thursday, Friday, Saturday, Sunday).  In the mid-80s Dave Nuermberger, as President, helped lead the way for LCP to become legal. The organization applied for and was granted tax exempt status by the IRS.

The Little Colonel theater is an older building, dating to the early 1900s. The bank note was paid off in 1978 with much celebration, and relief, for those who cosigned the LCP bank note, but renovations are continually needed to keep the Playhouse up to date and safe. In the mid-80s, air conditioning was added to increase comfort for our guests. The kitchen has undergone renovations several times, most recently in the late 90s. And in 2000 or so, we finally had to replace our aging sign. The old sign was quaint, with a wooden background and raised white wooden letters that set out from the background about six inches. Weather kept deteriorating the wooden letters. When one would rot enough to fall off, Bill Aiken would pick up the pieces and take them to one of our members, Paul Townsend. Paul is a local dentist and longtime member of LCP, but also an accomplished cabinet and furniture maker. He would take the old letter and use it as a guide to make LCP a new one, which Bill would reattach. Finally, time and weather caught up with the sign, and it was replaced with a more modern one that includes our logo. We freed up some time for Paul by replacing the sign.

In 2006, in preparation for the 50th anniversary, LCP completely modernized the two bathrooms and did a major repair to the outside masonry, especially on the front of the building. The windowsills and steps leading into the building had deteriorated quite a bit. The long-delayed, but much-needed, repair was finally completed.

In 2008, near disaster struck the playhouse when the front of the building was taken off in a massive windstorm. Despite the damage to the building, the shows went on as planned! For a few months, the plays were held in alternate locations, but before long were back in the newly renovated building. The theater was particularly grateful for the support of the community during that time, and have been working hard on continuing the improvements on the building.

The Little Colonel Players was founded (as stated in the by laws) “…to foster the art of drama by presenting plays of an educational as well as entertaining value to its members and the public…” LCP has been fulfilling this mission for sixty years, and hope to continue pursuing this mission over the next sixty, and beyond.